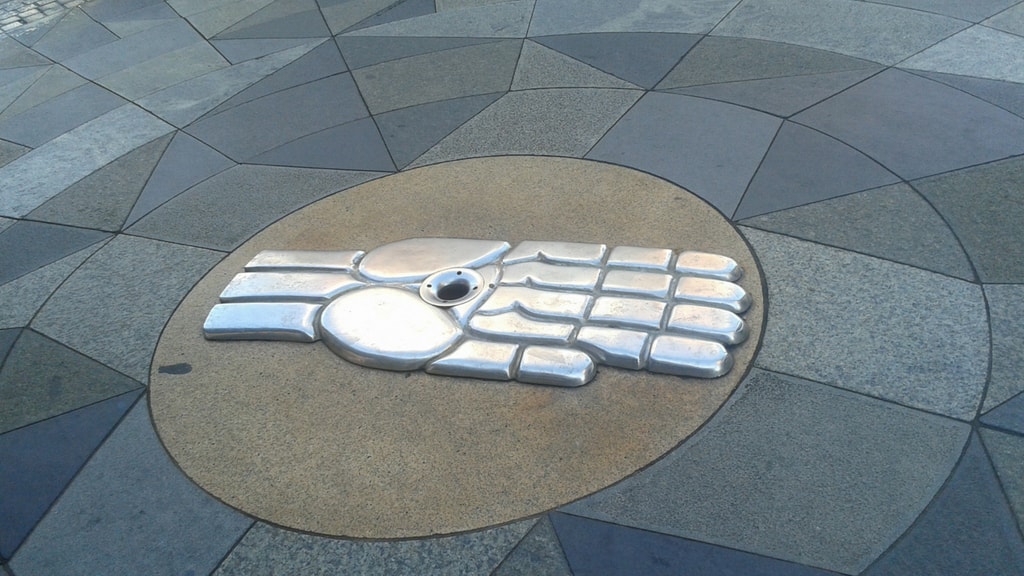 Photo: Holstebro Turistbureau
Attractions
Monuments
Bjørn Nørgaard is the artist behind the three art circles Hand of Jesus, Source of Life, and Odin's Eye in the pedestrian street Nørregade in Holstebro. They are all designed as circular coatings in colored granite with a stainless steel figure in the middle. The Hand of Jesus with the nail mark symbolizing the law. Source of Life with Vulva - the woman's genitals and source of life. Odin's Eye - Odin had only one eye. The second, he had sacrificed in Mimer's well to obtain wisdom.
Address

Jesus' Hand, Life's Spring and Odin's Eye in Nørregade. As part of the renovation of Holstebro's pedestrian area in 2002, Bjørn Nørgaard was asked to be a consultant on what should be on the surface of the new pedestrian area. He suggested, that at in three places there should be dome-shaped circles made of different coloured granite representing three themes. The middle of these circles acts as a source from which water is pumped out which runs over the granite which bringing to life the colours of the stones.

Jesus' Hand is located at the intersection of Skt. Jørgensgade and Nørregade. This dome shaped circle is made of granite in every hue of green. The dome consists of a number of concentric circles symbolising the perfect, the eternal and the divine. A cross, eight star tips and the rays of the sun are embedded into it. The circles and the hand in the middle symbolise the divine strength and power.

Life's Spring is located at the intersection of Rådhusstræde and Nørregade. This dome shaped circle is made of granite in every hue of blue. The base pattern is spiral, which is an ancient symbol of fertility. It is cut through by organic streams of water. A conventionalized vagina is placed is the middle symbolising the source of life.

Odin's Eye is located at the intersection of Horsstræde and Nørregade. This dome shaped circle is made of granite in every hue of red. The pattern are squares pushed into each other. The square symbolises the earthly, and the eye in the middle symbolises the god Odin who had to sacrifice his one eye to obtain insight and wisdom.

Twelve Jacob's Ladders at the end of the pedestrian street's northern end and The Citizens of Holstebro are also examples of Bjørn Nørgaard's artworks in Holstebro.

You can join a free guided tour to the art in Holstebro on Wednesday at 1 pm in July and August. The guided tours start from Woman on Cart of Alberto Giacometti in front of The Old Town Hall.