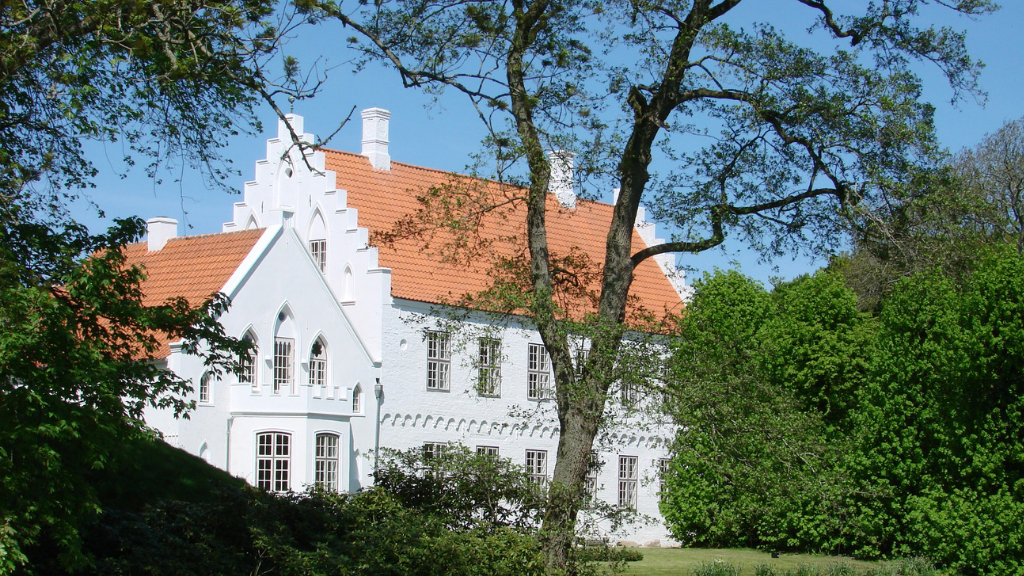 Nørre Vosborg is a unique manor house with a history of 700 years. With this quote, Hans Edward Nørregaard-Nielsen has pinpointed the special atmosphere of Nørre Vosborg:

“Nørre Vosborg is the place where you can stretch out your inner human being in full size”.

In 2004 an extensive restoration of the manor house started. In April 2008, the doors were opened to this beautiful renovated manor house. Nørre Vosborg consists of a number of living rooms, a great hall, conference rooms, restaurant, and the barn plant containing a multi hall with 300 seats, two large exhibition halls, and 56 hotel rooms.

During the restoration, great stress was laid on maintaining the outer expression, and everything was handled with a gentle touch. The aim is to make Nørre Vosborg a cultural centre of power with own hotel and restaurant. A meeting point where culture life and business life can be mutual inspired.

History:
The first written tales of Nørre Vosborg are from the year 1299, where we hear about a manor house by the name of Osborg. Os means mouth of a stream. The manor house Osborg was then situated by the mouth of Gammel Å, southwest of the present location and thus closer to Nissum Fjord.

Through times, many different families have owned the manor house. Niels Bugge is the first we hear of. He was among the leading magnates of Jutland, and was killed in 1359.

During Niels Bugge’s ownership a warning was given about a coming flood. The warning is described in the tale about “the man from northwest in a blue mantel who will make the tower lean”. The flood came in 1530 where after the manor house was moved to its present location.

In the course of time, many great persons have visited the manor house. Among others Hans Christian Andersen who stayed here in 1859 from 5th – 20th July. Here, “Stories From the Dunes” was written, and some of his famous paper collages made.

Experience the place where Hans Christian Andersen spent the night. Have a walk in the beautiful nature around the manor house, where you will find several paths. Enjoy a meal in the restaurant in the north wing from the 1600s, and sleep well in one of the rooms in the barn plant – all decorated with respect for the time past.

You can take a guided tour of the manor. Find the next tour on Nørre Vosborg's website.